I was bummed to hear of the closing of Emily Gassman’s namesake restaurant, Em’s, in the Marmalade neighborhood. It, along with Martine and Cucina, were among SLC’s first American bistro-style eateries.

The good news is that in the space that was Em’s, a brand new restaurant called Arlo has opened. The new owners completely gutted the place and turned it into a very eye-catching and inviting restaurant. Currently, dinner service is being carried out Wednesday through Sunday on the spacious patio with social distancing. In-house dining hasn’t begun yet. Customers can also order online for takeout dishes. My wife and I visited Arlo for Sunday supper last weekend. Arlo owner/chef Milo Carrier is a Salt Lake City native who attended the Culinary Institute of America after he began working professionally in restaurants at age sixteen. Among others, he was sous chef at one of my favorite San Francisco bistro/brasseries, Nancy Oakes’ award-winning Boulevard. He describes the cuisine at Arlo as “elevated casual.” The menu is organized not by appetizer, entree, etc. but simply by smallest or lightest plates to largest. Hence, the first menu item is “Bread & Butter” and the last is a Roasted Pork dish. In between are salad, tarts, pasta dishes and more.

I highly recommend sharing an order of Bread & Butter ($3). It’s freshly-baked bread in a cinnamon roll-style spiral, topped with poppy seeds and served with homemade butter described on the menu as “possibly the world’s finest French butter.” It was damned good butter, but served hard and cold and difficult to spread. That’s a shame.

The first couple of items we ordered – the Bread & Butter and Ceviche – arrived almost instantly after our server took our order. We had to request to slow things down a bit; we weren’t in a hurry and were hoping for a leisurely dinner date. After making that request, the pace of dinner service improved dramatically and we were able to linger and enjoy our meal on the gorgeous, vine-shrouded patio.

The Ceviche ($9) was very interesting and not quite like any I’ve had before. It was a fiery, saucy ceviche of Pacific rockfish with tiny but incendiary Fresno chiles and cherry tomatoes, served with a brown rice-cilantro crisp alongside. I appreciated that the bowl of ceviche resided in a second bowl, on ice, to keep it cool and fresh. The ceviche is quite good as long as you enjoy spicy food and my wife declared the rice crisp to be one of the favorite things she’d eaten in ages, and gluten-free, to boot.

Skip over this paragraph if you’re tired of hearing about the pandemic. A large table next to ours at Arlo was occupied by a group of mostly women who were extremely conscientious about wearing masks. In fact, they were so considerate that they put their masks on whenever a server or busser would approach their table throughout the evening. Kudos for being responsible diners! On the other hand, I was getting more and more annoyed throughout our meal by a large family at a table who insisted on letting their unmasked kids roam all over the patio and approach tables like ours, and then, mom followed after them not wearing a mask and also coming within a foot or so of various diners’ tables. So much for social distancing. I sort of wish the staff at Arlo would have asked them to stay seated or to wear masks while wandering about. But I understand the difficult position that puts them in. My wife, who is a restaurateur, says she hates having to be the “mask police,” constantly asking folks at weddings and such to wear their masks. When you dine out, be courteous and responsible to others. Is that really too much to ask?

Okay, back to dinner. Between the Ceviche and our main courses my wife and I split a salad. We appreciated that our server brought us two separate salads rather than having to use share plates, a nice touch. We were torn between “A Simple Salad of Greens” ($9) with tomato confit, a Beet Salad ($12), and the Chopped Radicchio ($10). We opted for the radicchio and I was happy we did. It was a very generous serving (split into two portions, as mentioned) of mixed chicories very lightly, but judiciously dressed with a Parmesan vinaigrette and topped with large green olive halves and sunflower seeds.

There’s a very interesting sounding pasta dish on the menu that tempted me: Ravioli ($17) with sweet corn, Gruyere, tomatoes and basil. However, I rarely see seafood stews on restaurant menus in Utah and so I decided I’d try the ravioli another time. The Cioppino ($26) was excellent, with a small exception. Cioppino is a “catch of the day” type of seafood stew that originated in San Francisco, and usually combines fish and shellfish and is served with toasted or grilled bread. Arlo’s Cioppino is pretty traditional – a mix of shrimp, mussels and halibut with a big hunk of toasted bread with which to soak up the tasty tomato-based broth. Unfortunately, the shrimp had an inexplicable chlorine bleach taste which was pretty off-putting. Shrimp aside, the cioppino was very good. My wife oo’d and ah’d over her Roasted Pork ($29), and she rarely even orders meat from restaurant menus. So you know it was good. And indeed, it was. Pretty spectacular, actually. Tender chunks of boneless pork were served on a bed of delicious blue corn polenta, with green beans alongside and topped with a heavenly tomato and peach chutney. This pork dish is an Arlo keeper. 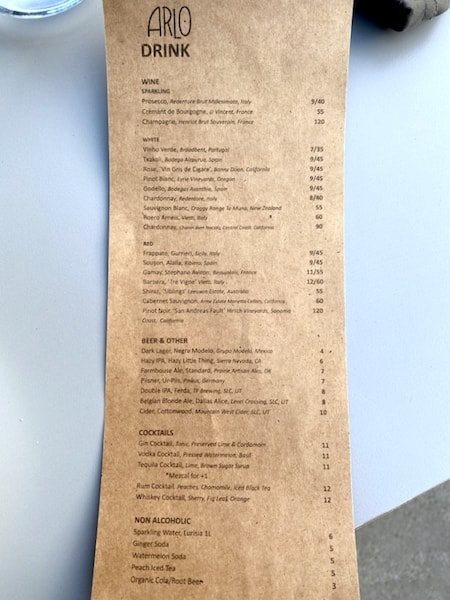 Arlo offers beer, cocktails, wine and non-alcoholic beverages and the wine list, though not gigantic, is very appealing. There are a number of interesting selections that you don’t see everyday, such as Crémant de Bourgogne sparkling wine from France, Txakoli from Spain, Vinho Verde from Portugal, Frappato from Italy and others. We enjoyed a bottle of The Eyrie Vineyards 2017 Oregon Pinot Blanc (see this week’s Sip column) with dinner. We would have enjoyed it more had our server not taken it away prematurely. The wine was getting too cold in an ice bucket, so I took the bottle out and set it on our table. Well, apparently thinking that we had finished the bottle (we hadn’t) he snatched it, and turned it upside down into the ice bucket before I could say, “It’s not empty!” Oh well … stuff happens.

All in all, I was very impressed by Arlo despite some minor glitches. And I wish all the luck in the world to any restaurateur who’s willing to open an eatery during a pandemic. Like Em’s, Arlo has the vibe and the cuisine to make dinner feel like a culinary getaway of sorts – a peaceful, comfortable place to dine at a time when we can all use a little solace.