It’s not unusual to see sprawling solar farms now-a-days but, what the heck are those sheep doing?

Tradition thrives along with new technology 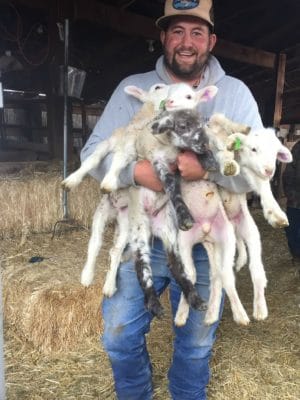 Hearing someone refer to themselves as an entrepreneur usually conjures up a certain stereotype: the young, hoodie-wearing, manic visionary pushing the latest techno breakthrough, or everyday types in their best suits nervously pitching a new idea to a group of investors.

But Jacob Benson, with his central Utah accent, pickup truck, and working dogs, is also an entrepreneur; a person who looks for new opportunities and takes full advantage of them.

Rather than pursuing a new technological innovation, Benson has spent most of his life looking for ways to continue the tradition of sheep ranching that has been practiced in the region for more than a century, and he’s been at it most of his life.

“When I was a kid,” he says, “a good friend of our family (Eddie Larson) gave me a “bummer” lamb (an undersized or neglected lamb that needs help) to raise. I could feed them with a bottle but then they needed to graze. My family weren’t ranchers, but my dad said I should go to some of our neighbors that were and tell them I would work for them if I could put my lambs on their pasture.”

Benson said the labor-for-pasture arrangements went on for years as he continued to learn more and become more interested in raising sheep. Eventually, he got involved in showing his animals at the fair, selling and breeding them.

“I kept learning more, and I had a good little business going, but my dad was keeping the money,” said Benson. “But I just kept going. I thought that was what I had to do. My grandpa told me Eddie, who gave me that first lamb, could teach me a lot, so I went to work for him taking care of the sheep during the summer on Cedar Mountain.”

As a senior in high school, Benson told his father he wanted to attend Southern Utah State University like the four generations of his family before.

“That’s when my dad showed me the account he’d been keeping since I was a kid with all the money I’d earned from my lambs.

He said, ‘Here you go. Your college is all paid for,’” said Benson. After studying agriculture and plant science at SUU, Benson headed back to the sheep business after graduation.

He was able to buy some Bureau of Land Management permits for grazing his approximately 300 sheep in the area east of the town of Parowan and on Cedar Mountain. He also began working for the Department of Agriculture as conservation planner for five counties in central and southern Utah, and serving as chairman of the Utah Wool Growers Young Entrepreneur Committee.

Sheep and solar go together “I just want to keep learning and meeting people in this industry,” he said. “There is always more to learn. I’d talked to some ranchers in California who were using their sheep to graze in places to keep weeds down and are part of fire suppression efforts or clearing rights of way and I thought that was interesting.”

So, three years ago, when the Boise-based company Clēnera began constructing a large solar array west of Parowan, where he now lives, Benson saw a new opportunity and approached the company with a proposition.

“I said to them, you have to have ground cover out here to keep the dust down. If dust gets on the solar panels it will decrease the efficiency. You can send people in to cut down the weeds and grass, but it is hard to get around all the posts and things between the solar panels. I told them my sheep could eat around all that and keep the weeds down. They can take that biomass and convert it to wool and meat and save them the trouble of getting crews in there.”

Since then, every spring, Benson’s sheep roam the solar farm munching the weeds and the more delicate greens that grow in the perpetual shade of the solar panels.

“It has been working out great for both all of us,” said Benson. “The panels are generating power and the sheep are making fiber and food for a lot of people, and we’re doing it all on this less desirable land where sheep have been an important part of the ecosystem for a long time.”

Rather than the disruption caused by many new and emerging technologies, Benson sees an opportunity to continue a regional tradition.

“I think there is more opportunity here. There are some other sheep ranchers I know who are working with the solar companies too,” said Benson. “The sheep industry is the backbone of this area, and I think this (development of solar farms) can work out for everyone.”

What to read more about Utah solar and renewable energies? Click here.