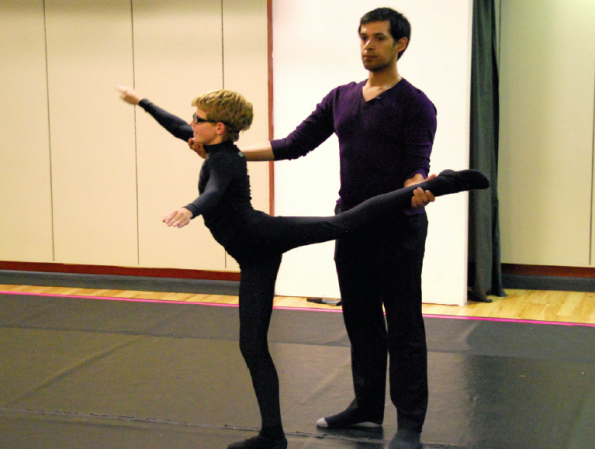 Cristobal Marquez started dancing at the age of three so he could be just like his brother. Later in life, he jumped at the chance when asked to perform for the Houston Ballet. He has since gone on to dance at the Las Vegas Ballet, as well as perform in several guest roles around the world. Bringing his talents to Utah, he is now both the artistic director and mentor to some of Salt Lake City’s upcoming stars at his studio, The Ballet Conservatory of Salt Lake in Trolley Square. His students are comprised of four boys to every 100 girls, a fact that leaves him confused. “All universities with dance departments offer thousands of dollars in scholarships to male dancers,” he explained. “Men have so much work in ballet.”

As I looked around for the future Cristobals, I asked Parker Russon, a 7th grader with a few seasons under his belt, why he was here and not out on the football field or glued in front of a video game like most kids his age. “Well, my mom’s office is right below the studio,” he said, pushing his sports. glasses higher up on his sweaty nose.

“It’s kinda fun and seems to help me with my other sports like soccer and water polo,” he grinned. Watching him effortlessly leap and spin, Cristobal added, “Studies have shown that ballet dancers are stronger overall than other athletes.” Personally, I was exhausted just watching them.

Cristobal laments that in the US dance is viewed more as a hobby than a legitimate pursuit.

The first year that he opened his studio, he took students from never having competed to placing in the top twelve in the Youth American Grand Prix, “the Olympics of dance.” In the four years since he opened his door, his students have continued to earn honors in the competition, many winning 1st, 2nd and 3rd prizes.

Cristobal remains dedicated to his mission to bring “good education and good understanding for the people here,” and hopes that his effort will help create a level playing field for any males wanting to get involved with dance. Until then, a boy in dance will certainly have first dibs on a lot of cute girls!