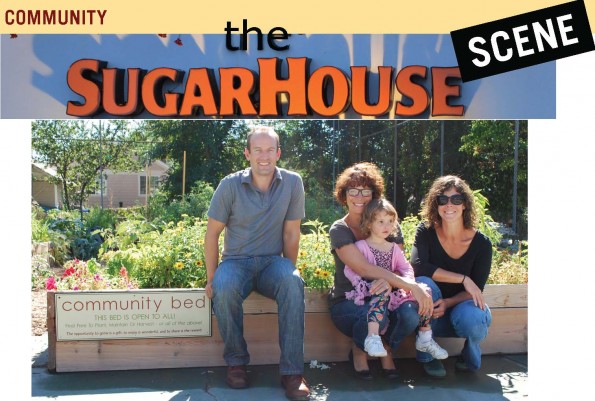 Until recently, the only thing growing in the abandoned tennis courts in Sugar House were weeds of neglect. But thanks to the nurturing care of Aimee Horman, Heidi Spence, Tamerin Smith and Mark Morris, The Sugar House Community Gardens have grown into a positive force for the neighborhoods around 2225 South and 900 East.

Construction on the new street car in Sugar House won’t be completed for another 2 years so the four came up with an economical way to use the courts. Abandoned and neglected lots seem to scar the beauty of our city’s landscapes and the four thought it would be a shame to let the space sit idle. The group then pitched their idea to the city and the gardens took root.

“We told the city that we wouldn’t even have to tear up any concrete, so after a few meetings, they agreed to allow us to use the space for the gardens,” explained the designer and landscaping architect, Mark Morris. “We started our first raised beds around Mother’s Day and now we share it with the Boys and Girls Club and several local sponsors. If we show how successful it is, we can double the amount of beds and keep it going for another year.”

The city has already started looking at other abandoned lots to do similar projects if this one is a success. The end-of-the-year produce exchange will give the community a chance to share in the fruits and vegetables of their labor.